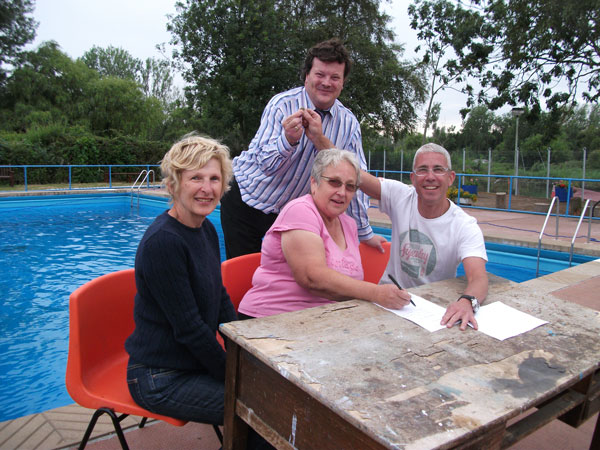 Beccles Lido Limited was set up in 2009 by Suzanne Gibbons, Maureen Saunders and Shaun Crowley (seen above signing the freehold to the Lido). Our vision was to acquire the old and neglected heated open air swimming pool in Beccles and to create a destination facility – Beccles Lido, where local people, visitors and tourists would want to visit and where bathers could have fun, keep fit or just relax in the beautiful surroundings of the river Waveney.

BLL is a company limited by guarantee (to protect its Directors) and a registered charity.  The Directors (who are also the Trustees) were initially recruited through Waveney District Council based on business, financial and management skills as well as relevant knowledge and experience including within the charitable sector.

Having established Beccles Lido as a successful, community run enterprise, BLL acquired Beccles Public Hall in 2013 and now successfully runs and manages this historic landmark building as a popular entertainment venue that is also available for hire.

To support this new venture and to add further resilience and accountability to BLL, the Board was expanded at the beginning of 2012 with the addition of new Directors: Sue Bergin, John Cushing, Terry Dentith and Eric Wareham, with John and Terry having extensive knowledge of the Public Hall.

Sue Bergin, Terry Dentith and Eric Wareham have since resigned and BLL owes each a huge debt of gratitude for their hard work and vision in making the Hall and the Lido the assets they are today.

Following a restructuring in 2021, Shaun Crowley stepped down from the Board of Trustees and was appointed Managing Director, Vicky was elected as Chair, Maureen Saunders as Deputy Chair and Suzanne Gibbons as Secretary.

In the future, BLL’s charitable objects allow it to acquire and manage other carefully selected leisure assets in Beccles and surrounding area, if the opportunity reasonably arises and the Board considers it prudent to do so.  In 2012 it acquired Big Dog Ferry, which runs alongside the Lido under the Lido management group.

BLL hopes that it can help and inspire similar projects both locally and nationwide, and is in close communication with various other groups, including those seeking to save, or who have already saved and now run, their local open air swimming pools and community theatres and arts venues.